Buy the first piece: A Q and A with Elisa and Joel Sumner

Elisa and Joel Sumner are regulars in the Austin art scene. Being dedicated collectors of local artists, I recently sat down with them to talk about the art of collecting. Their private collection houses over 100 works; and every wall of their house has an original piece of art on it. But, building a collection like that isn’t difficult. As I learned, it’s about passion and care.

H.C. Arnold: When did you start collecting?

Joel Sumner: It’s a complicated question in that, when do you consider yourself a collector? We bought our first piece of art when Elisa got a bonus at work and said: “I’d like to buy a piece of art with it.” And I thought: “That sounds like a fine idea.” So we bought something from Brian Joseph. He had a studio down on 6th Street. We bought this piece, we hung it proudly in our house, and we said: “wow, we got a piece of art.”

Shortly after that was the first EAST. There were maybe 40 stops. We went to a bunch of them, and we ran into this artist named Daniel Burns. He had done a piece that emotionally resonated with us. It was a subject matter that was close to our hearts. It was an Austin landmark, and he had done it in a way that really captured the fondness we had for it. It was actually the old Intel building. He turned it into something beautiful.

So, that was the second piece. I’m not sure that set us on the path, except then he invited us to his house. He was having a show with Shawn Camp. We met Shaun, and we developed a relationship with him. We ended up buying another piece from him some where along that process.

The next year at EAST we saw everything we could and the two of us both chatted about what we liked the best. That’s what we went back and bought another piece.

Elisa Sumner: That person was James Ferraro. Well, we went back the next year and we bought another piece from him, or we bought another piece from him throughout the year, and since we liked what he did, we went back to his place the next EAST. He, his brother, and Dustin Downing were there. James said: “I love you guys, and I love that you want to buy my art; but I want to take you out and show you some of my favorite artists.” And we ended up buying from all the people he took us to. They were: John Mulvany, Alonzo Rey, and the Painterly Handsomes

Joel Sumner: Yeah, so it was a combination of we got in the habit and comfortable with the idea of buying a piece of art and the valuation of it.

Elisa Sumner: The Mulvany was a little high for an early piece, but we really loved it. That was something I wouldn’t have taken the step on. But, we had James with us, and he said these are my three favorites. I kind of needed somebody to say this is a really great piece of art. It made me OK with buying it. It’s still one of my favorites. I’ve always given James a lot of credit for that.

Joel Sumner: So I don’t think we really acknowledged the collector label until 5 years later when somebody said: “oh you’re a collector.” I mean, we bought art; but it was those ingredients: someone bringing us in, getting to see an impact, having something on our wall that we like and have emotional response to, and it was all of those things that perpetuated it.

H.C. Arnold: What do you mean by valuation?

Elisa Sumner: For example, we have different people we bring in from our work sometimes. When grayDUCK opened, they did a high-tech show at one point. There were 3-d glasses and stuff. We invited around 50 people, and most of them came. The questions we got were: “do we have to pay?” And I explained: “no, it’s free and they’ll give you wine.” And they asked: “do we have to buy something?” I said of course they would like that. But, I think just getting them into the gallery was a big deal because they had never actually done that before. Then they asked: “how do I know if it’s worth this much money, and how do I know if it’s a good investment?” I told them I never look at it as an investment. I look at it as: “do I like it, do I want to look at it, and do I think it’s a fair price?” We don’t care about appreciation.

Joel Sumner: We don’t have the intention to resell anything in our collection.

H.C. Arnold: Clearly you guys buy as a team. How does that work?

Elisa Sumner: Sometimes we’ll be at a show, and I’ll love one work, and he’ll love another, but then we meet on another one. And those that we both love, I think are the strongest in the collection. I think it’s cool, because if we just bought for ourselves, I would have all people and he would have all straight lines.

Joel Sumner: We have different aesthetics. But generally, we like the show, we like the pieces, and we decide to pick the best one. Like Elisa said, because we both bring somewhat different approaches to each piece, we’ll point out different things to each other, and it becomes a group decision.

Elisa Sumner: But, I don’t feel we are winding up with a compromise though. I think we end up with the strongest one.

Joel Sumner: We started that early on because we hadn’t met a ton of artists for one. We had only met a couple, and also, we had started buying pieces. We realized at some point, if we continued on this, we were going to have a house full of just a couple of artists and we weren’t really sure that’s what we wanted. Also, it didn’t encourage us to talk to other artists. So we thought ok, lets have a rule that we will only buy three works from one artist. That will force us to make sure that we are focusing on only he best pieces, and that it has to be stuff that we really love. Also, it will force us to keep seeing what’s out there.

Elisa Sumner: And it’s hard sometimes because there are people who continue to make art. And it changes, and I really love it. But, it makes collecting easier.

Joel Sumner: And in the end, I feel it’s made our collection stronger because we have diversity. Our rule forces us to focus on just the best artworks, knowing that essentially our choices are limited. And, it’s kept the right relationship with the artist. We’re upfront with the artist about our approach, and it’s good for everybody.

H.C. Arnold: Can you elaborate about your relationships with the artists you’ve collected?

Joel Sumner: That’s been a lot of our history. Most of our purchases are either directly from the artist or we meet the artist in the process of working with the gallery. We go to an opening, and the artist is there, and we’ll talk to them, asking what was behind the work, or we see them at social situations. Most of the artists tend to be young and full of life, and that relationship alone, even if we weren’t purchasing any art, just being in that community, it’s a very vibrant community.

Elisa Sumner: There is something I really admire about artists. They work whatever job they can so they can keep creating art. I love that passion.

H.C. Arnold: Do you have any advice for someone wanting to start an art collection?

Elisa Sumner: Back to EAST, I always try to collect extra catalogues, and if I’ve heard someone tell me that they’re interested in buying art, I give them the catalogues and a list of people I like. I also tell them, for example, if they like photographers, they should go find photographers and visit their studios.

Joel Sumner: Whenever someone says: “oh, I’m interested in finding out more, I’d like to go to some art shows,” I always send them to a group show because there is plenty of good art out there.

Elisa Sumner: Also for new buyers, I won’t recommend a show where the lowest price is two thousand dollars. There are some shows where five thousand is the minimum buy, and that’s not the first show you want to send people to because they’re just going feel that it’s un-attainable.

Joel Sumner: You asked how and when did we become collectors? It’s more like: you buy your first piece, and then you buy your second, and your third, and then it kind of becomes a habit. So where is the line? If you bought one, you’re not a collector. If you bought 2, I think you’re on your path. Then at some point you say: “gee, I have house full of art.”

Elisa Sumner: The first couple of pieces we bought, I was so excited. I would always point them out because there was something so cool to me that I owned original pieces of art. It gave me so much joy.

Joel Sumner: That’s why we are so passionate about the East Austin Studio Tour. That’s the thing that got our start, and we figure there are other people out there like us. We’re not that unique, so we tend to send people down the path we went down. 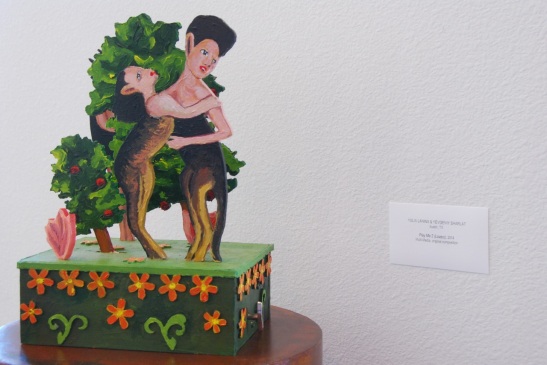