On the Mark: the paintings of E.E. Jacks

-The painter doesn’t paint things in light but the light of things.

Jacks’ claim on her website that “no subject is off limits” proves to be only a half-truth when considering the totality of her portfolio. True, her repertoire of imagery spans the diverse territory of natural and urban landscapes, figurative works, and still lives, there is still one consistent element always present in each painting: the craft of the mark. And, it is by this craft that they have a direct affection on the viewer in their sensuous, or visually haptic, modality.

To begin, these works are not mimetic, nor are they penetrable, or penetrating. They do not imitate the world around them. They cannot be entered, or traversed, like the world in which they physically exist. Nor do they enter, or spill into, the world either. They are, as Jean-Luc Nancy elucidates in his essay The Image-the Distinct, “distinct… what is withdrawn and set apart by a line or trait.” This division transpires throughout a manifold of things.

Often her paintings (of the ones I have seen) are displayed in thick, dark wooden frames, visually juxtaposing themselves in contrast to the white walls they are displayed on. The image size itself tends to run small, thus keeping a viewer from “stepping into” the work through surmounting an optical distance in the way lager paintings lend themselves towards being encountered. And finally, there is what is presented: not so much what is portrayed (the girl opening the refrigerator door, the house at night, or the empty wine bottle), but the mark that traces these figures. Before one sees the house, the girl, or the wine bottle, one first sees the mark, the color, and the texture. It is only in forgetting the mark that the visions of the figures first appear. But one cannot forget for too long.

Rather, at the very moment that those figures appear, they turn their back to us. We see them as mark, color, and texture, and again they withdraw in that contact. The canvas appears heavy with impasto, and we read its image through this distancing grammar. The fabric of the coat is first the fabric of the cadmiums and rose madders woven by the flourishes of brushwork. And it is not a coat that we can ever wear ourselves. 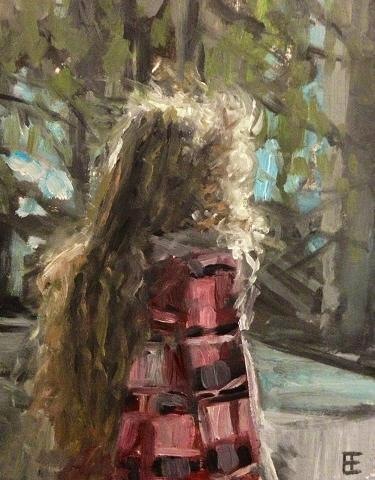 Nancy marks a similar occurrence when he cites a short passage from Edith Wharton’s literary work: “The Summer.”

-A girl came out of lawyer Royall’s house, at the end of the one street of North Dormer, and stood on the doorstep. The springlike transparent sky shed a rain of silver sunshine on the roofs of the village, and on the pastures and larchwoods surrounding it. A little wind moved among the round white clouds on the shoulders of the hills, driving their shadows across the field.[i]

What he goes on to elucidate is that “with the ‘girl’… an entire world ‘comes out’ and appears, a world that also ‘stands on the doorstep,’ … that places us on its threshold, on the very line that divides the outside and the inside, light and shadow, life and art, whose division is at that moment traced by something that makes us cross it without eliminating it (the distinction): a world that we enter while remaining before it.”[ii] How is this possible? In the simplest of reminders, these are words, things not able to be walked through, and yet we are connected to the scene through them. Thus he concludes “if it possible for the same line, the same distinction, to separate and to communicate or connect… that is because the traits and lines of the image (its outline, its form) are themselves (something from) its intimate force: for this intimate force is not ‘represented’ by the image, but the image is it, the image activates it, draws it and withdraws it, extracts it by withholding it, and it is with this force that the image touches us.”[iii] Thus we must move past chains of signification, and tedious discourses to what brings those very things forth.

Sure, one could situate Jacks’ paintings by, and within, discourse. They appear, echoing calls back to Rembrandt, Monet, Morisot, Bonnard, and Liebermann in both their techniques and images. And, in the contemporary of 2014, and subsequent poly-media practices pervading most fine artist activity, they are a quintessential claim of, and to, painting. There is no confusing them with collage, photomontage, printmaking, photography, or any of the other 2-dimensal genres. But, what such a superficial reading bypasses is that force that brings these comparisons into play. It neglects to properly assess the work on its own (as intimate force), and instead, cheapens it through relying on history, returning it to what has been historically proven as meaningless: talking heads, and infinite chains of significations. Instead, Jacks’ paintings demand to be met beyond, or beneath that.

This meeting happens by way of the craft of the mark. The craft of the mark is that intimate force. It bears the weight of the artist’s hand, the pressure and the turn of color, while dividing the viewer from that very pressure itself. One does not feel the bristles of the brush without the line they have made though the paint (another division there, between the edge of this and that color: the red and the pink, the gray and the blue; or the lateral pull and the horizontal push of this or that mark). Further, what is drawn: the coat, the hair, the trees are withdrawn as we see them in their crafted marks; and reversely, these marks, when drawn, are withdrawn when we see the coat, the hair, and the trees. Thus, what is drawn is also withdrawn, and in that double-gesture, an intensity of presentation makes itself felt. We encounter the force of bringing forth, the presentation of presentation.

Where the intimacy lies with these works is not in what they depict (the figures turn their backs to us), and yet we see their “world” from behind them, looking over their shoulder as both apart, and a part, of what is there. But beyond that gaze, the intimacy reveals itself in revealing that force of presentation. The paintings trace into the visible what is invisible. Or, as Nancy states: “the image is the evidence of the invisible.”[iv] They share with their viewers that force that compels one to take notice, to think, to feel, to even create; that same force (albeit in a different sense) that Jacks must have felt in which the moment presented itself to her as it withdrew into the dark shadows falling along the Pacific.

-The Final Kiss of Dawn

[i] From Jean Luc-Nancy’s text: The Ground of the Image.